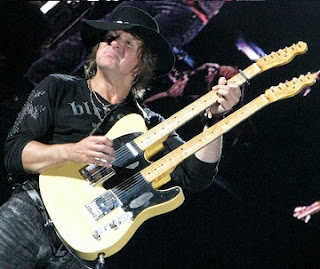 Richie Sambora will not be performing on the current leg of the Bon Jovi tour, which began tonight in Calgary. And after the Because We Can Tour opened in such dramatic fashion in February, who knew the start of the next leg of the tour could be shrouded in just as much, if not more drama?

About half an hour before the concert was set to start, the announcement was made at the arena and on the Bon Jovi website:


Due to personal issues, Richie Sambora will not be performing on this upcoming leg. All shows will go on as scheduled.

The venue announcement also stated that Bon Jovi would be donating $100,000 to the Calgary Homeless Foundation.

There are few details other than these vaguely worded messages but the band was supposedly all set to go in Calgary until about 3:30pm when Richie wasn't at soundcheck. Jon told the crowd that "Richie isn't in jail or in the hospital or anything but he won't be playing anytime soon." Which still doesn't really clear anything up.

Given Richie's past addiction issues, there's plenty of speculation along those lines, as well as some tweeters saying he had a heart attack, but we honestly know nothing at this stage. I would imagine that a fill-in lead guitarist (maybe Phil X?) would be used for the remaining shows and hopefully we get some more details when that is announced.

Jon was reportedly in top form tonight and shared guitar duties with Bobby Bandiera, although You Give Love a Bad Name was apparently played without a solo and Richie's talkbox was missing from It's My Life (Apparently Bobby used talkbox on an acoustic/electric hybrid of Livin' on a Prayer).

Email ThisBlogThis!Share to TwitterShare to FacebookShare to Pinterest
Labels: because we can tour, calgary, canada, richie sambora, setlist, where's richie?