Right off the bat, I'm going to admit this is a very self-serving blog post -- but hopefully it's of interest to some of you too! 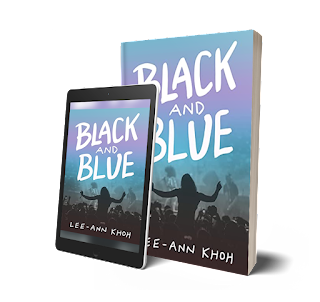 In one of my other lives, I fancy myself as a writer. And now my debut novel, Black and Blue, will be released into the world on November 1! It's a contemporary coming-of-age story and the main character, Jade, just so happens to be a huge Bon Jovi fan among other things because... why not? It's something I clearly have a lot of firsthand experience of. 😀

Jade is 18, and this band saved my life when I was a teenager -- and I wanted to honour that in some way. Especially since I didn't know if I'd ever publish another book after this one (and technically I still don't, but I certainly intend to).

Anyway, like I said, this post is shamelessly self-serving. The point of it is basically to tell you all that I have a book coming out and you can pre-order it now if you want to.

Learn more about Black and Blue and find it at your preferred online retailer. 🙂

Now, you might have noticed the title of this post and concluded that I don't care about SEO. But to bring it all back to Bon Jovi, it's also a lyric from "(You Want To) Make a Memory". I love the song, but the music video is also one of my faves and it was recently remastered. I don't know about you, but that sounds like a great reason to watch it again to me. 😉

And one month before my book comes out, Diana: The Musical -- with music by our favourite Tony award-winning keyboard player, David Bryan -- will make its debut on Netflix.

I haven't blogged here in quite some time. Aside from the busyness of life getting in the way -- which I'm extremely grateful for because not everyone has been lucky enough to keep working throughout the pandemic -- there just hasn't been a huge amount for me to talk about when it comes to Bon Jovi. I mean, individual members have their own projects, but the band obviously hasn't been able to get together and tour.

But 2021 marks the 35th anniversary of Bon Jovi's breakthrough album Slippery When Wet -- a record that I think deserves a lot more celebration than it's currently able to get. To honour the milestone, Bon Jovi digitally remastered the "Wild in the Streets" video and uploaded it to YouTube for the first time.

In Perth, where I live, a local band -- also called Slippery When Wet -- paid tribute to the anniversary by playing the album in its entirety at a recent gig. I shot a video of "Never Say Goodbye" on my phone:

It was beautiful and actually kind of emotional getting to see Slippery performed in its entirety, albeit not by the real Bon Jovi in their prime.

Will Bon Jovi (current lineup or otherwise) tour again? It's hard to say anything with any certainty these days.

In the absence of touring, it looks like Jon's going to keep doing the Hampton Water Makes a Splash online gigs -- the "second annual" charity concert, in support of The Roots Fund, took place back in July. I neglected to write about it at the time, but if you're yet to watch it and have about an hour to spare, here it is:

I feel like this sort of thing suits Jon more these days but man, I'd still really love a Bon Jovi show. 🥺

But I'll end this "hi, I'm still here" post on something different... Phil X plays guitar on Kurt Deimer's version of "Have a Cigar" (originally by Pink Floyd), which was released in August. Phil is also in the music video: