Jon Bon Jovi was just on The Late Show with Stephen Colbert two nights in a row (January 16 and 17). First to do this interview, in which he discussed:

On the second night, Jon returned with Bon Jovi to perform "You Give Love a Bad Name":

I read somewhere that they also recorded a performance of their new song "When We Were US" that's slated for broadcast around the time the single is officially released, but maybe someone can confirm this?
Posted by Lee-Ann Khoh at 6:10 PM No comments:

Howard Stern to induct Bon Jovi into Rock Hall; debuts When We Were US

Jon Bon Jovi appeared on The Howard Stern Show on Sirius XM Radio on January 17. During the show, it was announced that Howard Stern will be the one to induct Bon Jovi into the Rock and Roll Hall of Fame in April. "When We Were US", a new Bon Jovi single that will be released on February 23, was also played for the first time on the show. Here's the song in full, recorded from the broadcast:

I'm not subscribed to Sirius XM but there are some clips from the interview on Howard's website.

Here's Jon telling the story of asking Howard to induct the band into the Rock Hall:


And Jon on Donald Trump's alleged campaign to prevent him from buying the Buffalo Bills NFL team:


Listen to more snippets on Soundcloud and HowardStern.com. 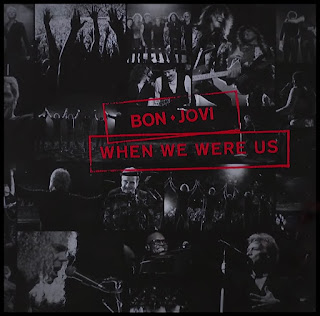 Email ThisBlogThis!Share to TwitterShare to FacebookShare to Pinterest
Labels: howard stern, interview, rock and roll hall of fame, this house is not for sale, when we were us

Jon Bon Jovi on The Moment with Brian Koppelman

Jon Bon Jovi was recently interviewed by Brian Koppelman for his podcast The Moment. The episode aired on January 9, 2018.

In the hour-long interview, Jon talked about:

Jon also said Bon Jovi intends to play 30 shows in March, and is planning to tour on a smaller scale from now on (long breaks, fewer stadiums). They still haven't announced tour dates though, so if it's going ahead in March, they're leaving it pretty late. (The interview was conducted in December, I believe.)

*UPDATE 11/1/18: North American dates have been announced for March, April and May 2018. The new version of This House Is Not For Sale, featuring additional tracks "Walls" and "When We Were Us" will be released on February 23.*

This was Jon's first podcast interview (not including radio interviews that were later made available as podcasts) and I thought it was pretty good. Jon seems more relaxed and candid than he has been in the past. And there's some swearing but nothing you haven't heard before. 😉

You can listen to The Moment podcast on iTunes.
Posted by Lee-Ann Khoh at 10:49 PM No comments: