Hugh McDonald to be inducted into the Rock Hall?

When the 2018 nominees for the Rock and Roll Hall of Fame were announced, the band members eligible for induction were also revealed on the Rock Hall website. For Bon Jovi, it would be the original five: Jon, David, Tico, Richie, and Alec. I understood why, but have always maintained that if Bon Jovi got into the Rock Hall, Hugh McDonald deserved to be inducted with them. And I was quite upset that some people were saying no one but the original five had ever done anything worthy.

But some eagle-eyed fans noticed in the last 24 hours that, if you click on Bon Jovi's inductee bio on the Rock Hall website, Hugh McDonald's name has now been added to the list of band members. Which hopefully means he'll be inducted as well. I can't adequately express how over the moon I am about that prospect.

When David Bryan and Tico Torres were interviewed about Bon Jovi's impending induction, they said Hugh deserved acknowledgement for the role he's played in the band, so maybe they had something to do with this. Or maybe Jon pointed out to the Rock Hall that it was Hugh who played on the first ever Bon Jovi song and had played in the studio on the band's most important records. Who knows?

Hugh apparently only learnt of his likely induction after his wife Kelli got wind of it on Twitter:

I honestly had NO idea! I called Hugh and told him! Thanks for the heads up! It’s so exciting! I’m bawling like a baby!
— Kelli McDonald (@saintlyedge) December 19, 2017


Denny Laine, an original member of the Moody Blues, was also quietly added to their page after initially being left out.

UPDATE 21/12/17: According to a statement from the Rock Hall that was published by the Asbury Park Press, Hugh's and Denny's belated inclusions came about as follows:


“Once the Inductees were determined, the members of the Nominating Committee reviewed the list of artists and made the decision to add Denny Laine of the Moody Blues and Hugh McDonald of Bon Jovi to acknowledge their significant contributions,” said a spokesperson for the Rock Hall via email. “We’re honored to induct them at the ceremony in April.”

UPDATE 15/03/18: This Deseret News article talks about how Jon appealed to the Rock Hall to get Hugh inducted. It was meant to be a Christmas surprise but the cat was let out of the bag when people noticed Hugh's name on the Rock Hall website! 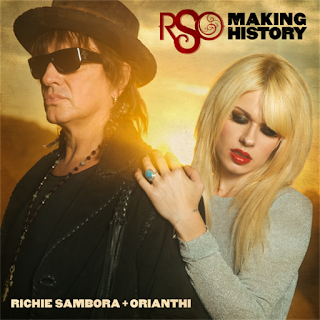 Following the release of their debut EP in September, RSO's second EP Making History came out on December 15. It features the following tracks:

Making History is a bit more rock, and therefore probably not as unexpected, as Rise was. Based on the first couple of listens, I think I prefer it to Rise.

You can listen to Making History on Spotify:


"One Night of Peace" can also be streamed on Spotify:

First of all, Bon Jovi fans made sure the band won the fan ballot. The top five in the fan vote were:


Each of the top five gets one additional vote in the official induction vote. But ever since the fan vote was introduced, whoever finished on top has been inducted into the Rock Hall, while others in the top five have been known to miss out. So this was the first step.

Still, there are certain committee members who have worked to keep Bon Jovi and other bands they don't take seriously out of the Rock Hall, so that was another hurdle to overcome. But today, it was announced that Bon Jovi will be one of next year's inductees. The Class of 2018 is as follows:
The induction ceremony will take place in Cleveland, Ohio on April 14, 2018. As previously mentioned, it will be the original lineup of Jon Bon Jovi, David Bryan, Tico Torres, Richie Sambora, and Alec John Such who are officially inducted. In an interview with the Asbury Park Press, Jon indicated that Richie and Alec would be part of the ceremony:

“I haven’t had the opportunity to hear from either of them (Sambora and Such) but without a doubt, they both will be invited and asked to not only come and share it, but to perform,” Bon Jovi said.

The article also revealed that the two upcoming songs are called "When We Were Us" and "Walls", and that a tour announcement is imminent (though it feels like we've been hearing that for months!).

Read the full article at this link.

UPDATE: Rolling Stone posted an interview with Tico and David. Among other things, they talk about how the original and current lineups fit into the band's legacy:


Bands often play with former members at the induction ceremony. Are you down to play with Richie Sambora and Alec John Such that night?

Tico Torres: Absolutely.
David Bryan: Yeah. Why not?
Tico Torres: They are a huge part of us. We'd love it if they played with us.

Do you keep in touch with Alec?

He played with you guys in 2001. The fans are always very curious about him. He's the mystery man of Bon Jovi to so many people.

Tico Torres: He's always been the mystery man of Bon Jovi, even then he was like 007.

Do you think he'll show up?

Many people will argue that Hugh McDonald should be inducted since he's been there for so long.

Tico Torres: He's a big part of the band. They should acknowledge that.

Read the full interview at this link.

Jon was also interviewed on Sirius XM, and you can listen to the highlights via Soundcloud on Bon Jovi's website.

Jon Bon Jovi did a Facebook Live video yesterday to answer some fan questions. A big announcement had been teased, which turned out to be that new Bon Jovi music is on the way. Here are the main takeaways from the video:

You can watch the full video below, or on Bon Jovi's Facebook page: