Rock in peace, Alec John Such 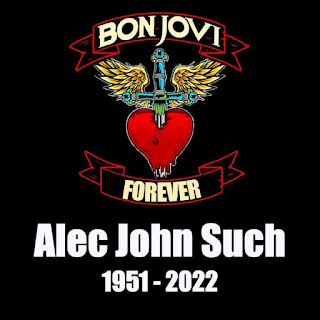 It was Sunday in the US (and Monday in my native Australia) when the news came through that Alec John Such had died at the age of 70.

Alec left Bon Jovi in 1994, before I became a diehard fan (or really knew any music that wasn't on Play School or Sesame Street). So I never saw him live in person. But as the original bass player, there's no disputing Alec's importance to the history of what would go on to become my favourite band -- through thick and thin, for better or worse. And I guess it's a sobering reminder of the mortality of our heroes.

"We are heartbroken to hear the news of the passing of our dear friend Alec John Such. He was an original. As a founding member of Bon Jovi, Alec was integral to the formation of the band. To be honest, we found our way to each other thru him - He was a childhood friend of Tico and brought Richie to see us perform. Alec was always wild and full of life. Today those special memories bring a smile to my face and a tear to my eye.
We'll miss him dearly."

I'm so, so glad Alec got to be part of the Rock and Roll Hall of Fame induction in 2018. All those speeches were emotional for me at the time and they'll be even more so whenever I revisit them now.

Bon Jovi's current bass player, Hugh McDonald, posted a sweet picture of himself with Alec on Instagram, and described reconnecting with Alec as one of the high points of the band's induction into the Rock Hall.

Here's Alec rejoining his former bandmates for "Wanted Dead or Alive" at Giants Stadium in 2001:

And things like this epic performance of "Blood on Blood" from the Moscow Music Peace Festival in 1989 hit a little harder today -- brothers 'til the day that we die: