New Drills single I Love You On Her Lips

Phil X & The Drills have dropped a new single, "'I Love You' On Her Lips" -- and here's the lyric video:
The song is heavier than anything Bon Jovi would do, but it's on brand with what I'd expect from Phil when left to his own devices. That CGI woman creeped me out a little though... Her movements are so zombie-like, but maybe that was the point. 😅
You can download or stream "'I Love You' On Her Lips" now.
Feel free to share your thoughts below. 😊
Want to stay connected? You can find us on Facebook @blameitonthelove, Instagram @blameitonthelove and Twitter @bonjoviblog.
Posted by Lee-Ann Khoh at 10:02 PM No comments:

Email ThisBlogThis!Share to TwitterShare to FacebookShare to Pinterest
Labels: i love you on her lips, phil x, the drills

Update (25/02/2021): We're back online! 🥳
Update (23/02/2021): I can no longer view any of the Facebook page content despite being an admin. 🙁 Asked a friend in the US to check and they could still see it all -- so it looks like it's still fine internationally but not in Australia. However, the news ban is set to be lifted in the coming days, so fingers crossed that all the banned pages (including ours) are back up soon.
Original Post:
I'll try to keep this short and sweet because we're a Bon Jovi blog, not a media blog. But long story short, Blame It On The Love's Facebook page has been blocked in Australia.
Basically, Facebook has reacted to the Australian Government's proposed News Media Bargaining Code by imposing a blanket ban on news content in Australia. That includes blocking news links from being shared and the removal of all content on Australian news pages.
Unfortunately, many non-news pages have been incorrectly taken down as well, including charities, community groups, health and emergency services, and small businesses. The disability organisation I work for has had its page wiped and is waiting to hopefully be restored. They're not alone.
And as I mentioned at the top of this post, Blame It On The Love got caught up in it too.
As far as I can tell, everything on our page shows up normally for the rest of the world, and I can still post to the page as an Australian-based admin. I've put in a support request so hopefully it will be sorted out soon.
But in the meantime, I wanted to fill people in on what was happening. Our Instagram appears to be unaffected, despite Instagram being owned by Facebook, so that's good.
Anyway, I suppose it's a good reminder of the pitfalls of being too reliant on a social media platform. "I Believe" might have alluded to that if it were released now...
Feel free to share your thoughts below. 😊
Want to stay connected? You can find us on Facebook @blameitonthelove, Instagram @blameitonthelove and Twitter @bonjoviblog.
Posted by Lee-Ann Khoh at 11:07 PM No comments:

The official music video for Bon Jovi's latest single, "Story of Love" has been released:
Jon, armed with an acoustic guitar, is in a (freaking gorgeous) room surrounded by his family photos, home videos, and various sentimental items. I don't have kids, but "Story of Love" was one of the songs I was drawn to early on in the 2020 album listening process, even though it probably wouldn't have been my choice of single. And the video is really sweet. Despite lacking the album version's awesome outro...
A couple of days before the video's release, we got a sneak peak/behind the scenes look in which Jon remarked, "This COVID stuff is getting old because once again I'm stuck doing a video while the guys are all home!" 😀
Jon also called into BBC's The One Show on 12 February, where he was interviewed by Alex Jones and Ronan Keating ahead of the release of "Story of Love":
Feel free to share your thoughts below. 😊
Want to stay connected? You can find us on Facebook @blameitonthelove, Instagram @blameitonthelove and Twitter @bonjoviblog.
Posted by Lee-Ann Khoh at 10:14 PM No comments:

Story of Love single out now

The radio edit of "Story of Love" is out now... and yes, that epic instrumental outro has been cut out. But I knew that was coming as soon as I saw the words "radio edit" on Bon Jovi's social media, lol.
Anyway, here's the lyric video for the single version of "Story of Love":
Obviously the album version is better, but it's still a beautiful song. You can stream or download "Story of Love" from your preferred music service now.
Want to stay connected? You can find us on Facebook @blameitonthelove, Instagram @blameitonthelove and Twitter @bonjoviblog.
Posted by Lee-Ann Khoh at 11:07 PM No comments:

In news I was not expecting, the next single from Bon Jovi's 2020 album will be "Story of Love". Apparently the single will be out on 29 January in the UK.
I really thought "Beautiful Drug" would be next, but that's okay. My two least favourite tracks ("Limitless" and "Unbroken") already came out before the album, so it can only be smooth sailing as far as single releases go now (for me personally, anyway).
Hadley Freeman's interview with Jon for The Guardian also touched on the progression of his career since the 80s, "taking sides" in politics, his feud with Donald Trump, and Richie Sambora's departure. Jon said something vague about "seeing Richie around" in his interview with The Washington Post's Geoff Edgers, but he's now back to confirming that they're not currently in touch.
Anyway, you can read the full article in The Guardian. What do you think of "Story of Love" being the next Bon Jovi single?
Speaking of Richie, I never got around to posting this when it came out, but he did this interview with People magazine back in December:
The story says he suddenly quit Bon Jovi in August 2013 -- he actually left mid-tour in April, though it could've been around August that he realised he wasn't coming back, who knows? At any rate, Richie describes it as a tough decision he made but he's glad he did it. Doesn't sound like he has much interest in a return to Bon Jovi these days, so I don't know why some people keep badgering Jon about bringing Richie back as if Jon is the sole reason Richie isn't there.
Richie also spoke a lot about his family, specifically Ava -- he looks and sounds like a really proud dad, and they seem to have a positive father-daughter relationship, which is awesome.
As a side note, Richie and Orianthi got back together last year. I wonder if there'll be more RSO music in the works? (Although Ori released O late last year and Richie has a new solo record coming at some point.)Want to stay connected? You can find us on Facebook @blameitonthelove, Instagram @blameitonthelove and Twitter @bonjoviblog.
Posted by Lee-Ann Khoh at 9:46 PM No comments:

After recent unrest, the inauguration of US President Joe Biden and Vice President Kamala Harris went off without a hitch.
Jon Bon Jovi and the Kings of Suburbia recorded this performance of the George Harrison-penned Beatles classic "Here Comes the Sun" for the event:
The song fits the occasion and I like it, but it would've been nice to take the chance to showcase the still-very-topical 2020 album. "Do What You Can" would've worked well. "Let it Rain" would've been awesome. What do you think?
Here's the "Let it Rain" performance from On a Night Like This:
And because building bridges and tearing down walls is imperative right now, I thought I'd post a bit of a throwback... "Walls" from 2018:
Want to stay connected? You can find us on Facebook @blameitonthelove, Instagram @blameitonthelove and Twitter @bonjoviblog.
Posted by Lee-Ann Khoh at 9:41 PM No comments: 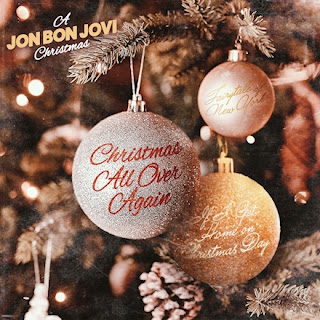 JBJ just dropped a holiday EP, A Jon Bon Jovi Christmas, which features three tracks:
You can download or stream A Jon Bon Jovi Christmas now.
"Fairytale of New York" is actually one of my favourite Christmas songs, but the original version by The Pogues contains some pretty controversial lyrics so I did wonder if Jon was going to:
Unsurprisingly, he did not go with C. 😆 (He chose A.)
Jon also did an IG Live interview with Geoff Edgers from The Washington Post, which has been described as awkward. And frankly, it is. But I thought there were some cool moments too, like when they discussed the evolution of Jon's social consciousness, and whether or not he worries about alienating fans. Besides, awkward video meets are the epitome of 2020, aren't they? 😜
You can watch the interview on The Washington Post's Instagram: