The video for "Superman Tonight", which was released in Germany earlier this week, is now up at www.bonjovi.de. Visually it's actually pretty stunning. Bon Jovi aren't really known for great looking videos so props to them, even though the marketing strategy of the single (and indeed the album) leave a lot to be desired.

It's got to be said though, while Hugh's always been omitted from the "story" parts of videos, he used to at least be included when it was the band playing. Looks like even that won't be happening any longer if this video and "We Weren't Born to Follow" are any indication.
Posted by Lee-Ann at 1:52 AM 1 comment: Links to this post

Final round voting for the Bon Jovi song to be played at the Grammys continues.

Give us a little intel on the tribute to Bon Jovi.
The fans are voting for one of three songs on CBS.com (that Bon Jovi will perform; they are “Livin on a Prayer,” “It’s My Life,” and “Always”). He won’t know which song that won until 30 seconds before he finishes the second song and then boom, he’s on it. He’ll do “We Weren’t Born to Follow,” and then Jennifer Nettles will come on and join him, and then he’ll go into one of three songs.

If that's for real, then colour me impressed. Although the litmus test will be if Jon can nail the vocals to "Always", which I'm hoping will be the winning song.

Anyway, most of the interview is about the planned Michael Jackson tribute but you can read it all here.
Posted by Lee-Ann at 1:34 AM 1 comment: Links to this post

Haiti single "Everybody Hurts" out February 7

The star-studded cover of REM's "Everybody Hurts", organised by Simon Cowell to raise money for the Haiti earthquake relief effort, will be available for download on February 7. The CD will be out the following day. Proceeds will go to The Sun's Helping Haiti fund and the Disasters Emergency Committee.
Posted by Lee-Ann at 10:15 PM No comments: Links to this post

Email ThisBlogThis!Share to TwitterShare to FacebookShare to Pinterest
Labels: everybody hurts, philanthropy

JBJ to sing for Haiti and guest star on 30 Rock

Jon will also guest star on 30 Rock's upcoming Valentine's Day episode, which will air in the US on February 11.
Posted by Lee-Ann at 11:05 PM No comments: Links to this post

Vote for Bon Jovi song at the Grammys - FINAL 3

The poll to select the Bon Jovi song to be performed at the Grammys has been whittled down to the final three:

Livin' on a Prayer
It's My Life
Always

Assuming our vote actually does count and Jon is up to the vocal challenge (which is questionable in itself if some of these promotional performances so far have been anything to go by), I would really love to see "Always" played. I mean, "Prayer" and "It's My Life" are played at every concert anyway, and "It's My Life" on far too many TV appearances... But "Always" is Bon Jovi's biggest worldwide hit and, until the Lost Highway tour, we didn't get to see it for five years (unless you include the This Left Feels Right version).
Posted by Lee-Ann at 10:32 AM No comments: Links to this post

The only part that's live is the vocals (The rest is playback and they didn't even bother bringing Hugh along to mime the bass), and quite frankly Jon sounds like he's struggling. Hope he reclaims the awesome vocals we heard during the European leg of the Lost Highway tour by the time The Circle tour kicks off.
Posted by Lee-Ann at 3:35 PM No comments: Links to this post 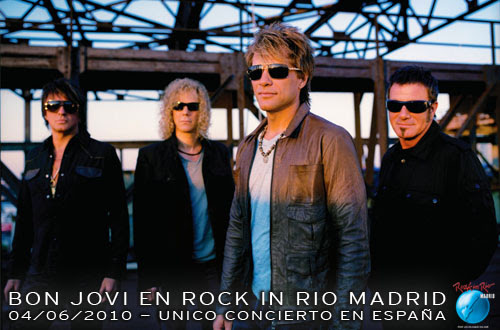 Apparently Bon Jovi will headline the Rock in Rio Madrid festival on June 4, 2010. The website is in Spanish, but you can paste the URL into Google Translate or something (It won't be perfect English but you'll get the general idea).
Posted by Lee-Ann at 12:03 AM 3 comments: Links to this post

Email ThisBlogThis!Share to TwitterShare to FacebookShare to Pinterest
Labels: rock in rio

In this Reader's Digest interview, Jon talks about The Circle, politics, and getting old.

RD: What is your new single, We Weren’t Born To Follow about?
JBJ: It deals with events like the re-election of Mahmoud Ahmadinejad in Iran. It’s meant to be an empowerment song for people who are committed. People like the young Iranian demonstrator Neda who (in June 2009) gave her life for her conviction. She was a leader, not a follower.

What? I know the video contains lots of stock footage, but... what? Never ceases to amaze me how songs like "It's My Life", "Have a Nice Day", and "We Weren't Born to Follow" can all sound the same yet supposedly be about completely different things.

There's a lot of politics being talked about in this interview (which I'm okay with because I'm "left leaning" but if you're more right-wing it might annoy you) but Jon also reiterates that he has no intention of entering politics himself because he has "too thin a skin".

RD: But then again you are always looking for new responsibilities. Are you a multi-tasker by heart?
JBJ: Perhaps that’s the answer. In any case I never was one to rest on yesterday’s successes. I’m much more motivated to find new challenges.

Check out the full interview here.
Posted by Lee-Ann at 3:04 PM 2 comments: Links to this post

So "Superman Tonight" will be released in Germany on January 22 as the second single from The Circle...

And apparently the European CD single will contain the following tracks:

Nice to see a second single finally but I think the follow-up single should have been released much earlier and I don't think Bon Jovi's had any impressive B-sides since the Bounce era. We'll see how this one goes. I have a sinking feeling that The Circle is falling by the wayside if it hasn't already, possibly due in part to some questionable marketing decisions. I know all the money is in touring these days but Bon Jovi essentially sells records on the back of past glories now and it's a shame because IMO The Circle is the best Bon Jovi album in 14 years and deserves genuine success. But instead you've got an uninspired lead single, bored performances of it shoved down your face, overpriced tickets, and Jon's "I'm a CEO" comments coming back to haunt him.

Maybe things will pick up when the tour starts.

Email ThisBlogThis!Share to TwitterShare to FacebookShare to Pinterest
Labels: superman tonight, the circle

The Tico Torres Children Foundation will be part of an effort to bring doctors, nurses, and supplies to Haiti in the wake of the devastating earthquake that struck on January 12. The Foundation has teamed up with Advant Salud and Global Care Delivery to help provide health care services to children in need.

"I think what's important is now we see it. How do we help fix it and make it better and my mind's always been for kids. I think they'll change the world so if I can reach out and help children at this point, I think it's important for all of us to pull together," says Torres.

Read the full article here.
Posted by Lee-Ann at 4:53 PM No comments: Links to this post

JBJ & Friends for City of Hope

Here's a video from blogger Justine Ezarik, aka iJustine who saw Jon Bon Jovi & Friends at the City of Hope charity event.

Posted by Lee-Ann at 4:39 PM No comments: Links to this post

Here’s your chance to pick what song Bon Jovi will perform live at the GRAMMYS®. Whether it’s the classic song ‘Livin on a Prayer’ or one of their newer hits, ‘Have a Nice Day’ the decision is up to you!

Here’s how it works: right now vote from the top six songs above*. Remember you can vote every day. Then on January 25th the list will be narrowed down to the top three songs with the voting continuing everyday. Then tune in during the GRAMMYS live on Sunday January 31st to see which song Bon Jovi will perform!

*The songs you can choose from are:
Livin' on a Prayer
It's My Life
Wanted Dead or Alive
Bed of Roses
Always
Have a Nice Day

Click here to vote. (Although it doesn't work for me because every time I enter the CAPTCHA, I get a message saying the security code I entered doesn't match even though it does.)

Personally I think it might have been more meaningful to have people choose between songs from The Circle, but oh well.
Posted by Lee-Ann at 7:33 PM 1 comment: Links to this post

Hi folks, I'm still in Japan and therefore haven't been as on the ball as I could be with updates. In fact, my last post was Christmas Eve so happy new year to you all! As a side note, if you're a music fan, Tower Records in Shibuya is almost pure heaven on earth... We're talking seven stories of CDs, DVDs, books and magazines, accessories and merchandise. I think I must have spent a few hours there.

Anyway I'll leave you with a couple of awesome videos of our guitar hero Richie Sambora at his Christmas show for radio station KLOS-FM. It's nice to hear that bluesy voice take centre stage sometimes. ;)