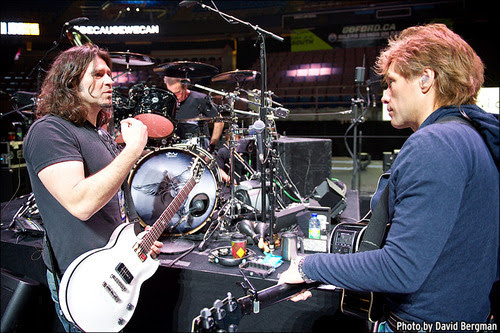 There's still plenty of speculation and not much information about what caused Richie Sambora to suddenly take leave from the Bon Jovi tour. But Phil X, who filled in for Richie for part of The Circle Tour, flew into Edmonton to again perform lead guitar duties for Bon Jovi.


Thank you everyone for your concern. I'm well, but had to stay in LA to take care of a personal matter.Love you all and see you very soon.

...while Matt Bongiovi emphatically denied a TMZ article claiming Richie had quit the band after falling out with Jon over money.

Ill say one thing the TMZ story is TOTAL SHIT.They are completely off with this one.

Btw Richie NOT leaving the band. They are NOT fighting.

Oh, and there was a concert on too, during which five songs Lost Highway songs were performed... and only three from What About Now, the album they're supposed to be promoting, that debuted at #1 last month for anyone who still takes notice of charts.