John Duddy talks about Because We Can video

As previously mentioned, former boxer John Duddy will star in the music video for Bon Jovi's latest single Because We Can. Here are some more details about the video:


Explaining how the Bon Jovi video came about, John says: “Basically, my boxing manager got a phone call from someone looking for a fighter who could act and he said he knew the perfect guy. After sending them my details and a headshot, they called back straight away. They asked if I could dance and act. That was around 4pm and he called back at 6pm and asked if I could start that Wednesday! It was kinda cool...”

In the Bon Jovi video, Duddy stars as a boxer-turned-soldier who spots the woman of his dreams while in the ring mid-fight - with the distraction leading to a knock out. Thereafter, the pair never chance to meet, despite many efforts, and eventually John’s character gets sent off to war without ever seeing her. In a fitting Bon Jovi ending, the pair reunite at the end, with Duddy’s character sweeps her of her feet.

“We did the video in December and it was like a short film really, one song with four different videos. It was brilliant to be involved with. And I get knocked out in the video too!

What is it about acting,” John laughs, “In my first two acting jobs I got knocked out!”

Check out the full Derry Journal article at this link. 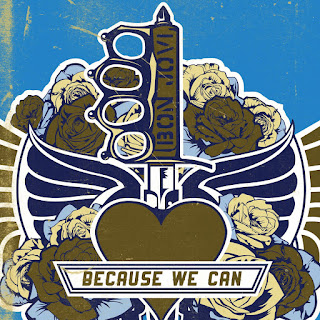 Email ThisBlogThis!Share to TwitterShare to FacebookShare to Pinterest
Labels: because we can, john duddy