Because We Can: Single drops Jan 7, artwork revealed

Bon Jovi's new song Because We Can hits airwaves on Monday, January 7 and the Bon Jovi app has revealed the artwork for the single. 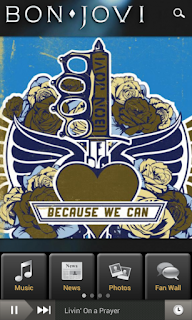 What do you think of the re-imagining of the heart and dagger?

You can download the Bon Jovi app for free via the Mobile Roadie website or search for it in the iTunes Store or Google Play. There seems to be a real push from the Bon Jovi camp to embrace the mobile trend, and Jon has indicated the app will play a key role in the album cover for What About Now.
Posted by Lee-Ann at 3:56 PM

Email ThisBlogThis!Share to TwitterShare to FacebookShare to Pinterest
Labels: because we can, bon jovi app, what about now