Bon Jovi will have a date with Argentina in October:


Exclusive presales for Banco Frances clients starts on August 20th by Ticketek system, phone # 5237 7200 or by internet www.ticketek.com.ar, official box offices and other retail outlets around the Country. Sales for public in general start on August 27th at the same retail outlets.

Been a long time coming, so it's great that South America is finally getting to see the band again. :)

In other announcements, one of our own, JoviBecky has a blog called Jovi Bits... and she'd love it if you checked it out and became a follower. Just click on the image below before August 20, and leave her a comment to let her know Lee-Ann (@lilkenobi) sent you. ;) Don't forget to follow the blog (there's a widget on the left hand side of the page). 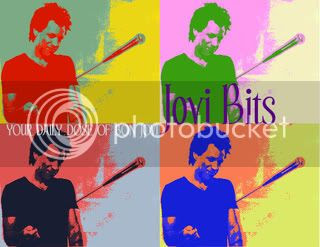 And yes, there's obviously potentially something for me in this, but I try to help the Jovi commmunity regardless. :)

Meanwhile BonJovi.com has posted a video of "Let It Rock" from the O2 arena as part of its Bon Jovi themed weeks but it's the same vid that was released in June. Not that it isn't a good performance. ;)
Posted by Lee-Ann at 12:52 AM