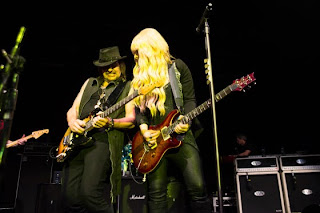 Richie Sambora kicked off his Australian tour at The Tivoli in Brisbane last night. Aussie guitarist Orianthi, who has played with Michael Jackson and Alice Cooper in addition to her own solo material, joined Richie's band and sang lead vocals on part of Livin' on a Prayer.