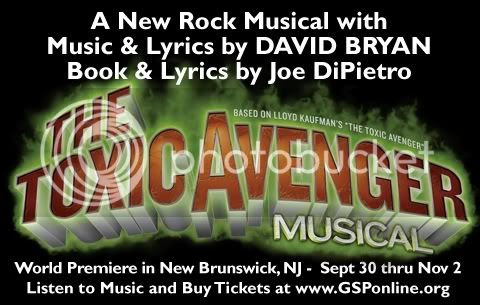 Bon Jovi's own king of the keys David Bryan teamed up with Joe DiPietro to write The Toxic Avenger musical, based on Lloyd Kaufman's 1980s comedy horror film. It's running at the George Street Playhouse in New Brunswick, New Jersey from September 30 to November 2 and being the massive Dave fan I am, I'd love to go see it (I also wanted to see Memphis!). Actually -- I don't want you to do anything you're not comfortable with of course, but -- if you're in NJ and would like to get down there and make me a bootleg of the show, I would love you forever. :P But barring that, at least we can listen to the songs here.

Pretty cool/funny shiz. Maybe not everyone's cup of tea but I'm diggin' it.