First things first. I shared this video on Blame It On The Love's Facebook page two weeks ago, but I'm going to post it here because I think it's really sweet. Even if it was possibly staged for the media. It's the video of Richie Sambora and Orianthi congratulating Bon Jovi on their new single, which was posted on both Facebook and Twitter. Jon (or someone on behalf of Jon) replied on both sites.


Congrats to all the guys on the new single! @BonJovi pic.twitter.com/zTiw9MhTYh
— RICHIE SAMBORA (@TheRealSambora) 18 August 2016 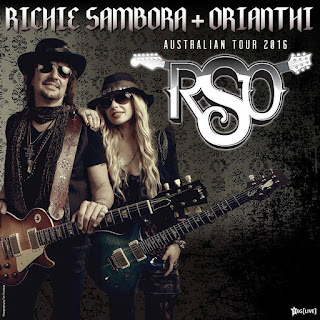 Anyway, Richie and Orianthi (aka RSO) are hitting my hometown of Perth next month, and I have tickets so I'm pretty excited. (Funnily enough, a Bon Jovi tribute band from Melbourne is also playing in Perth that night. I'm guessing that show was planned before RSO announced theirs.)

I saw Richie and Ori at Soundwave back in 2014, but it'll be good to see them do their own show rather than a festival this time.

(EDIT 20/9: RSO cancelled their Perth show, ostensibly due to recording commitments, but anyone with half a brain knows it was due to poor ticket sales. It's a lot like that time Richie conveniently got sick just before his US shows that weren't selling well.)

Anyway, Richie was interviewed on Mix 94.5 today. He talked about songwriting, working with Orianthi and producer Bob Rock, and his charity work. Listen to the interview here.

Richie also spoke to News Corp in an article that was published today. He said there was no bad blood between him and Jon, and that he was open to the possibility of a reunion with Bon Jovi:

“There’s no malice. Jon and I talked just a week ago. Everything is cool. They’re on a different trajectory, I’m on a different path. Plus I wanted to go out and sing.

“People conjugate a story that there’s problems. No. You spend 30 something years in a band. That’s a long time. Not a lot of bands have that kind of longevity. We weren’t a band who took any breaks. The Rolling Stones or U2 will take three years off so they have a life, we didn’t really do that ever. The 30 years we put in probably felt like 50 years.”

He also described the upcoming RSO album as "Sonny and Cher on steroids". Read the full article here.