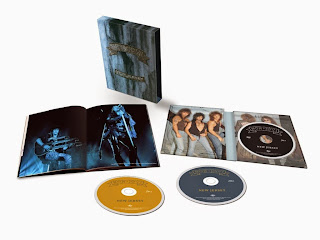 As part of Bon Jovi's 30th anniversary celebrations, new remastered editions of their New Jersey album will be released this year. The Deluxe Edition will be a 2-CD set featuring the full album plus bonus tracks on the first disk, and unreleased demos from what was intended to be Sons of Beaches (before it was whittled down to the 12 tracks we know as New Jersey) on the second disk. The Super Deluxe Edition will feature the two CDs plus a DVD with Access All Areas and the music videos on it.

The track listing for the expanded editions are as follows:

DISC 2: The ‘SONS OF BEACHES’ Demos

2. MUSIC VIDEOS From the NEW JERSEY album
All directed by Wayne Isham

The New Jersey Deluxe and Super Deluxe editions are set for release on July 1, although Australian music site Noise11 lists a June 27 date, so presumably the release dates will be staggered in different parts of the world. Other albums are set to get the "special deluxe" treatment this year, too.
Posted by Lee-Ann at 5:23 PM