Bon Jovi's been introducing a lot of people to augmented reality and you can now check out the artwork for What About Now via the Bon Jovi app: 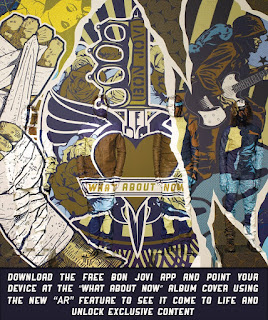 Also, the Because We Can image at this link now unlocks other content, including the behind the scenes video of Because We Can. The Behind the Scenes vid is also on YouTube.

Email ThisBlogThis!Share to TwitterShare to FacebookShare to Pinterest
Labels: augmented reality, because we can, bon jovi app, john duddy, jon bon jovi, not running anymore, what about now