A month out from the US election, on a day that the incumbent tweeted that he had tested positive to COVID-19... Bon Jovi: 2020 was finally released and you can download or stream it now. 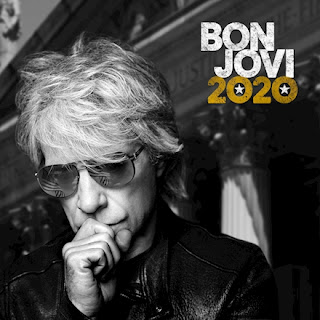 I mention elections and presidents because the album cover was inspired by a shot of John F. Kennedy, and the album title partly inspired by the fact that it's an election year in America. Funnily enough, I never mentioned the cover on this blog even when 2020 was originally meant to come out in May. It's a cool photo of Jon, though I'm not sold on it being the album cover... I guess I'd prefer something a little more abstract. Or band-oriented. But hey, we all know Bon Jovi is Jon's ship, so whatever.
Now onto the music.
It's early days but I am really loving 2020. I know it polarises people when Jon "gets political" or "tries to be Springsteen"... but screw that. Besides, much of the world is pretty effed in 2020 and if you're going to call your album 2020, you might as well make it a little time capsule of the world as it is.
When "American Reckoning" dropped, I had discussions with a few people about whether or not it was too on the nose. Certainly, there's no mistaking what it's about. But I actually like that Jon got specific. There are plenty of generic Bon Jovi songs already ("Have a Nice Day" was supposedly a sneaky diss track aimed at George Bush, but you'd never know it).
My first-impression faves from 2020 are "Beautiful Drug", "Story of Love", "Lower the Flag", and "Blood in the Water".
But I'm digging the album as a whole. Considering I was very lukewarm about "Unbroken" and "Limitless", the rest of it has ended up sounding pretty damn good in my ears. I could be getting caught up in the moment, of course. But as of 2nd October 2020, I approve. 👍
What are your early impressions of the album?
Want to stay connected? You can find us on Facebook @blameitonthelove, Instagram @blameitonthelove and Twitter @bonjoviblog.
Posted by Lee-Ann Khoh at 11:37 PM