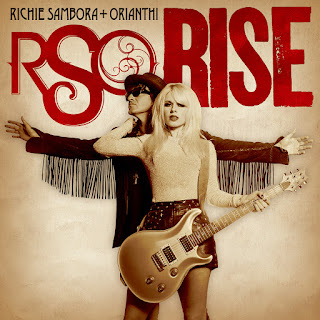 Rise, the debut EP by Richie Sambora and Orianthi's duo RSO has finally been released. (It's been four-and-a-half years since Richie left Bon Jovi, and almost four years since he met Orianthi. Plus we've heard a lot of "soons" in response to when their new music was coming out.) The track list is as follows:

I know some fans are a bit disappointed that after such a long wait, there are only five tracks being released. But it's been reported (though not officially announced as far as I'm aware) that Rise will be followed by a second EP, before a full album in 2018.

(UPDATE 30/09/17: RSO's e-newsletter and website confirm that Rise is the first of two projects to be released in 2017, with a full-length album coming next year.)

Rise was leaked last weekend so I've actually been listening to it for a few days. It's far from the guitar-driven record I was expecting when I first heard that Richie and Ori were working on new music together, but not a total shock after they debuted "Truth" live at NAMM earlier this year:

Anyway, Rise is a pretty diverse collection of songs. I'm hearing some country and RnB influences, among other things. It's grown on me over the past few days, and I have now bought a copy.

You can purchase Rise on iTunes and Amazon. (UPDATE 30/09/17: If you get it via the RSO website, you'll receive a reggae remix of "Good Times" as a bonus track.)

You can also stream Rise in its entirety on Spotify:


Have you downloaded or listened to the EP? What do you think?
Posted by Lee-Ann Khoh at 8:47 PM